Something less serious than usually - a hamster inspired business idea

It is Friday afternoon here, first weekend of month of March is approaching, and why not write something more fun, not about software, telecoms, databases and other boring stuff.

During last few decades I have had met many people who had lots of ideas of one or another business project. Being skeptical by nature, I have usually dismissed them as worthless, or lacking innovation or similar. However, as I have to admin that I have come up with craziest or stupidest project ideas myself, most of which, luckily never saw a daylight. Here is one of them:

All started with the hamster. We decided that kids need a pet. So we started from one of the smallest options available - a hamster. It was regular, small, tri-colored rodent, interested only in three things: eating, sleeping and running in his wheel. And running was his passion, he could run any moment, day or night, we could hear the plastic wheel making noise while spinning. Sometimes he did run few seconds and then rushed to get some food, sometimes he ran longer periods in a row. Those who have or had hamsters, will know what I am talking about.

Then the idea came to my head: how about if I measure total distance he runs, by adding simple bicycle speedometer to his running wheel? That turned out to be very simple: I attached a magnet to the wheel, sensor to the cage wall bar, recalibrated the speedometer to take in account diameter of the wheel and done. We started curiously observing the readings same evening, wondering what number will come up next morning. To our great surprise he ran more than 10 kilometers that night and total of 19km in first 24 hours! Good distance for such a small animal. Later we observed that numbers were not consistent: there were days he could run more than 20km, and there were days he did run less than 4...5 kilometers, with no obvious reasons.

After a while, observing hamsters running efforts we invented this idea: Since the kilometers run by hamster are totally unpredictable, how about creating a betting platform where people could place their bets of how many kilometers hamster would run on the given day. Closest guesser would be a winner. Let's bet on hamsters instead of horses. We would add a video feed to the site so people could see it, and maybe by looking at him they would find a signs which would tell how many kilometers he could or be willing to do next day...

Later we extended the idea with more features: let's allow people to participate with their own hamsters. We could develop and supply small kits which would include a webcam, a speedometer, and a small adapter to connect to the Internet. Then our betting portal would have many video feeds with hamsters instead of one, and people could bet on more hamsters per day instead of only one! We would have created a real hamster online community, a facebook for hamsters.

We never went beyond just fantasizing and laughing about the project, it was never meant to be taken seriously. However, we thought about many details. For example, we checked various domain names, and settled on runhamster.com -  it was available at that time. Also we thought that to gain initial "mass" - first hamster video feeds to publish on the site, we would by say 50 hamsters with 50 cages each with their own speedometer and video feed. Since we didn't have space for that, we would put them in my parents house garage...

As I said, it never came to life, nor we ever planned to actually build. But there were other, similarly crazy ideas, which we did actually tried...

Have a nice weekend! 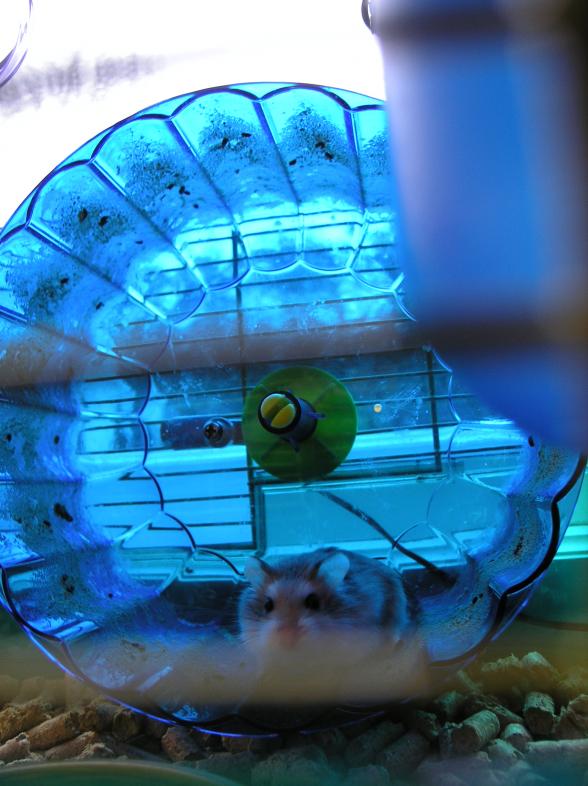 Tags: Fun, Hamsters,
Leave a comment
Prev. Article
Back to top
Next Article
About Author